This article is a revised and updated version of a post originally published in June 2017.

This article outlines the contribution made by carers to supporting the formal care system and the issues they face in undertaking the caring role for family members and friends. Legislative developments across the UK are discussed as well as issues relevant to carers and how these are being addressed in Northern Ireland (NI) and beyond. A fuller briefing paper on these issues was published by RaISe in March 2016. In a related article, we examine some of the key statistics relating to the informal care sector in Northern Ireland. 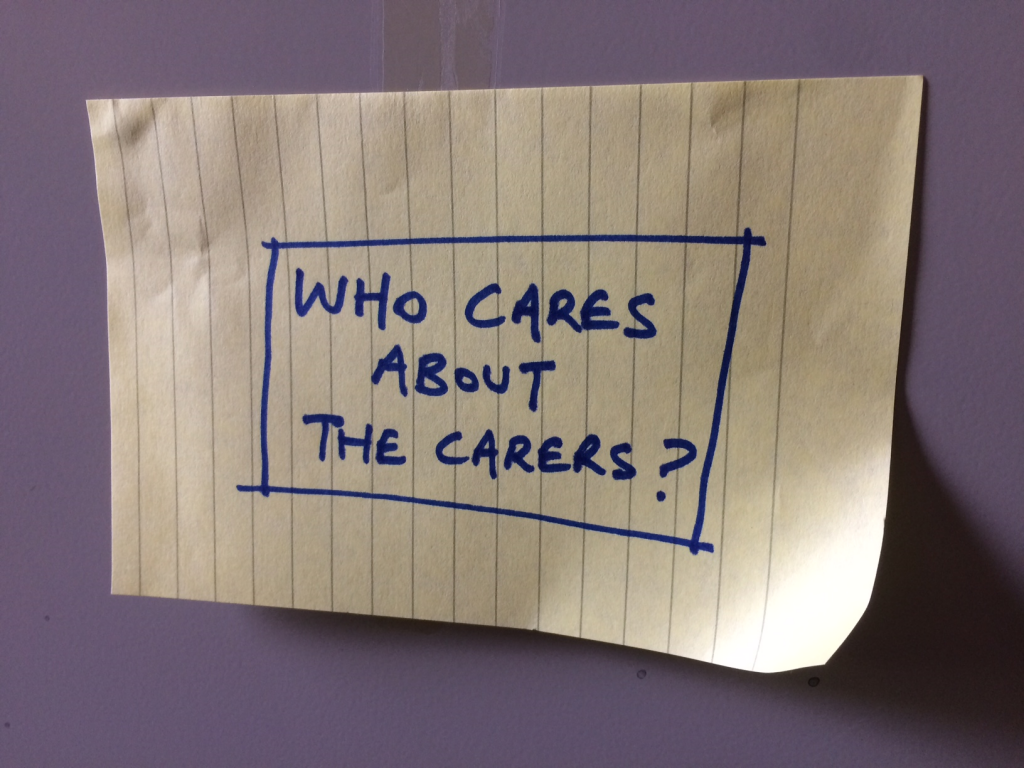 Carers and their contribution

Carers are people who provide ‘informal’, usually unpaid, care to someone with a long lasting health or care need, outside a professional or formal employment framework. This ‘informal care’ is often an ignored sector of the economy, yet it is thought that a staggering 80% of all care across the European Union (EU) is given by family and friends.

Even in countries with well-developed formal care systems, such as in the UK, the number of informal carers is estimated to be twice as large as the formal care workforce. Across the UK there are around seven million ‘informal’ or family carers and almost 60% are women. The number is rising each year and the economic contribution is estimated at over £130bn per year.

Without these carers the formal care systems across the UK would be unsustainable. As highlighted by Eurocarers (European Association Working for Carers) in its proposal for an ‘EU-level Strategy in Support of Informal Care Provision’, this ‘resource’ is under pressure due to various demographic and socio-economic developments, such as the trend to smaller families and delayed retirement.

Informal carers ‘prop up’ the formal care system in most countries, but there is a knock-on consequence for the labour market and economy. Providing care can cause lower productivity from carers who are combining care with paid work. If the workplace is unsupportive, this can lead to time off for their own health problems.

Many people wish to care for relatives, but if they are not adequately supported there are likely to be faced with health and financial challenges.

Over 200,000 people in NI currently have some form of caring role. Department for Communities data shows that at February 2018:

The most recent specific legislation in NI was the Carers and Direct Payments Act (Northern Ireland) 2002, which gave carers the right to an assessment and to be considered for services to meet their assessed needs.

It placed a duty on Health and Social Care Trusts to inform carers of their right to a care assessment and the right to provide personal social services to support carers directly. However, Trusts retain discretion to decide whether or not to provide service(s) to meet a carer’s identified needs.

NI is lagging behind the rest of the UK in addressing carers’ issues, in terms of both strategy and legislative development. Caring for Carers (2006) is the most recent NI strategy, whereas more recent strategies have been published in Scotland in 2010, in Wales in 2013, and in England in 2014.

In the rest of the UK legislation for carers has recently been updated:

From the carer’s perspective, a key advantage of the Care Act 2014 in England is that it places a duty on local authorities to provide the services required, within a national eligibility criteria. Additionally, it has broadened the eligibility criteria for respite care to allow carers to engage in work, training, education, volunteering or recreation.

The Act provides a strong focus on young carers, with the intention that they should be able to have a childhood similar to peers. It also requires local authorities to prepare carer strategies for their locality.

Scottish Ministers fulfilled a duty to publish a Carers’ charter under the Act to make carers aware of their rights.

The Social Services & Well-being (Wales) Act 2014 (came into force in April 2016) is a wide-ranging Act bringing together the duties and functions of local authorities with the aim of improving the well-being of people who need care and support, and their carers.

A key principle is ‘well-being’ and it places a general duty on local authorities to promote the well-being of people ‘in need’ and their carers. Assessments of carers must include:

A national eligibility framework will operate to determine when individuals and carers have an enforceable right to support from the local authority.

The Act also places a duty on local authorities to promote the development of social enterprises/co-ops/third sector organisations to provide ‘co-produced’ services.

With regard to the implementation of the Care Act 2014 in England, one year post-introduction, a review was requested one year post-introduction by Carer’s Trust (chaired by Rt Hon Prof Paul Burstow). It found that 69% of carers who responded to its survey had noticed no difference since its introduction, with too many carers still unaware of their rights; 65% had not received assessments, and 34% who had been assessed did not find it helpful.

With the Carers (Scotland) Act 2016 having just come into effect earlier this year and it being early days for the implementation of the Social Services & Well-being (Wales) Act 2014, full evaluation of impact for carers from those jurisdictions is likely to be some years away.

Carers in NI have expressed concern that their issues are not being addressed, including the impact on their own physical and mental health; detriment to their own life outside of caring; difficulties in balancing caring with paid work often leading to financial difficulties (compounded by cutbacks in social provision and increases in direct costs); and for young carers – impact on development of social skills, family relationships, and education/career prospects.

The NI Department of Health is currently taking forward a project to Reform Adult Care and Support. In December 2016 former Health Minister, Michelle O’Neill, appointed an Expert Advisory Panel tasked with identifying a range of proposals for change. On 11th December 2017 its Report was published, ‘Power to People: proposals to reboot adult care and support in NI’ designed to be considered alongside the wider Departmental reform programme ‘Health and Wellbeing 2026: Delivering Together’.

A key proposal is that the rights of family carers in NI are put on a legal footing and that a strategy to bring them into the heart of transformation of adult care and support is adopted.

During its evidence gathering the Panel heard that family, or informal, carers:

…already contribute the largest share to supporting people and that enabling carers to continue to offer support is essential to the future sustainability of the adult social care system.

In our view we need to find a way of supporting, understanding and valuing the carers’ role more explicitly and honestly. Access to the right information at the right time is a key wish, as is the availability of appropriate short term breaks so that carers can have regular respite from the role. The main request, though, is to be acknowledged and recognised and truly valued.

A review by the Organisation for Economic Co-operation and Development highlighted that support policies for carers across the UK and OECD countries generally fall into three main categories and these areas will likely require further consideration as policy and law are further developed in NI to support carers:

The law for requesting flexible working hours and practices has improved in the UK, although it tends to be used more by parents for child care. In the UK, carers often use annual or sick leave to fulfil caring responsibilities. Options for official paid ‘care leave’ are available in a number of countries, including Belgium and Scandinavian countries. Carers UK have called for a statutory entitlement to ‘care leave’ in the UK.

The provision of respite care is key to improving carers’ wellbeing with a range of services including day-care services, at home respite and institutional respite. In NI access to respite care is based on an assessment of needs by the HSC Trust. Policies across the EU generally include respite care, but legal entitlement varies. For example, in the Republic of Ireland, an annual grant for respite care can be used throughout the year.

Many OECD countries provide financial support through a ‘carer allowance’ and/or direct payments to those in need of care (or to carers based on an assessment of their needs). Both types of payments (allowance and direct payments) are available across the UK.

In Nordic countries the ‘carers allowance’ is considered as remuneration and municipalities may employ family caregivers directly with varying salaries, but are not obliged by law to provide them.  Care ‘wages’ may seem a promising avenue but they are a relatively costly option and raise the question as to whether or not more qualified formal carers should be used instead.

NI is behind in the UK and other countries as regards a strategy, policies and updated legislation to support carers. The ongoing NI Reform of Adult Care and Support is the vehicle by which change should be forthcoming for carers in NI, from legislative, policy and service provision perspectives.

Evidence shows that compensating carers financially is an important way to recognise their contribution, but the benefits can only be maximised in the context of a holistic care plan for carers and those being cared for, which includes training for carers, flexible working arrangements and adequate respite care.